North By Northwest is a Hitchcock movie (1959) that has held a spot in my memories ever since the first time I saw it. Staged at Mount Rushmore and in the surrounding areas, its scenes are the first to leap forth whenever Mount Rushmore is brought up. Growing up in the flatlands of central Florida,  the real mountains were a dreamland of evergreens and massive views.

In 1960, my family took a “Summer Vacation”, not unlike National Lampoon’s movie. My brother, Smith, had passed early that year and Daddy had an Army reserve class to attend in Fort Leavenworth, Kansas. We all needed to be together but needed a break from our reality, thus this vacation trip with him to Kansas.

We crossed the US on route 66 from Florida to Los Angeles then up through Yosemite NP to San Francisco and back across the northern route via Yellowstone and Rapid City to Ft. Leavenworth Kansas.

Our stop at Mount Rushmore was a perfect match to the North by Northwest movie scenes.

The café where Cary Grant was shot by Eva Marie Saint, the terrace outside and those irrepressible faces.  All indelible memories tied to my life events of that time.

In 1966, I again visited this memorial on my drive from San Francisco to Rochester, Minnesota on business.  It was the same. All that was missing was Cary Grant.

As we have planned out this trip over the past few years, Mt Rushmore has always been a pivotal point on our route. I have even watched North By Northwest a couple of times to refresh the nostalgia. MMmmmm  good stuff!

Merrily, too, has fond memories of this place from visiting it many years ago with her parents.

Yesterday, Merrily and I finally visited Mount Rushmore together.  We both remember vividly how beautiful the surrounding mountains were with all the exposed rock and deep green trees. Our anticipation of seeing those faces was finally peaking after so many months of planning.

But as we drove over to the monument from Broken Arrow campground just south of Custer, SD, we were stunned at the vast stretches of dead ponderosa pine trees. 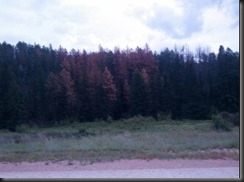 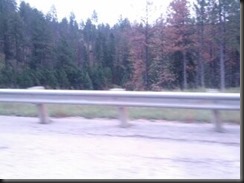 There are massive acres of standing dead for mile after mile. Some trees had obviously been killed some years ago but the majority of these dead trees still have the characteristic brown needles of freshly killed trees. We saw miles of house-size piles of cut dead trees along SD 89 in less vertical terrain.

When we moved from Boulder, Colorado in 1983 the area was beginning to show signs of this Pine Bark Beetle scourge but the vast landscapes of brown and grey trees we see here are heartbreaking. These are not the mixture of green with occasional brown tinges we remember. There is little green at all in many of these areas. Whole mountainsides are now flash kindling waiting for a lightning strike.

It was just not quite the same experience as we remembered so vividly but we pressed on following the signs to the monument and occasionally glimpsing the eternal faces when we got close to the park.

As we turned into the entrance something was definitely different! Instead of a winding narrow gravel road to the parking lot, there is now a massive row of toll booths for collecting parking fees. It looked as though we were entering the Jersey Turnpike instead of entering a favored National Monument.

Merrily audibly choked when she saw the price; $11 per vehicle and no discounts accepted.  She was ready to skip the whole thing but I could not abort my nostalgic needs over a few dollars more so we paid and tentatively entered the park.

Driving the quarter mile to the parking decks was indistinguishable from entering the parking complex at a major US airport but the signs, arrows and curves eventually got us into the multilevel concrete parking deck.

As we left the car for the parking deck elevator to the top level we carefully noted, as directed, the level number where we were parked.  Once topside, we began the very long uphill walk towards those enigmatic stone faces. A long, long walk.  I felt we were entering Disney World. 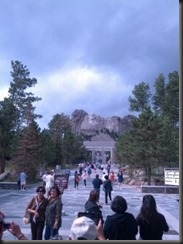 Even with a sidewalk that was 20 yards wide, the myriad of folks trying to take pictures of their companions with the mountain were frustrating our progress all the way up to the visitors center.

The massive granite columns and the runway-sized sidewalk guided us as the faces slowly grew larger yet, somehow it all seemed a little different.  Any moment we just knew we would be synced with our memories when we walked out onto the viewing patio outside the café…. any moment, now….

But the massive curved building ahead was not quite right. It was sort of in the right place and similar but not what I remembered.

We walked on uphill through the center of this structure of gift shops and headed up the avenue of flags. The columns of granite containing the carved names of the states and the dates they had joined the union, looked more like monuments in a cemetery than celebratory benchmarks.

Hmmm.  Now that’s different for sure….. Here we are at the viewing area but no restaurant. Just an expansive patio of granite pavers showcasing the mountainous faces above.

We snapped pictures and wandered around trying to get our bearings eventually seeing a sign mentioning a theatre presentation. We took the elevator down to the level beneath this huge patio and as the doors opened, there was the view we had been straining to see!  The massive faces viewed through roof high glass windows!

… But it imperfectly matched our 40 year old memories. The anticipated view from the café had morphed

But wait, there’s more…  2 theatres showing the carving of the mountain and an exhibit hall full of historically related artifacts and information stretched out to our left…. but no café?

As we watched the movie I struggled with this paradox of being where I expected to be and seeing what I expected to see but things were different at the same time.

As we left the theatre I chatted up a Ranger about my earlier visits, the movie and the changes since 1966. She helpfully pulled out a photo album and explained that the café, viewing patio and all the old buildings that I remembered, had been torn down.  We were, indeed, standing on that same ground I so vividly remembered but these huge granite halls had replaced those buildings in the 70s. The old facilities could not handle the millions of visitors each year but their replacement could handle Disney World quantities.

On the long walk back to the car I felt a little disappointed as I mulled over how different all of this is now.  Somewhere, somehow something was misplaced.  It was not lost as I can always watch North by Northwest, again, but it is just not what I remember and that has left me slightly unsatisfied… and $11 poorer.

The good news is that I can hang onto my parking pass and use it anytime I want all of the rest of this year…. NOT the same thing.

Time for a little moseying music

We are taking a few easy days as we make our way from Sioux Falls, SD to the Custer / Rapid City area, reflecting on what has happened so far and what might yet happen. Blowouts and engine problems tend to make one instinctively duck at just the thought of something unexpected happening. A few two hour driving days help settle us back into a calm confidence so we stayed the night in the Kennebec KOA and tonight will be in the Badlands KOA.

I am not a connoisseur of KOAs but they are a pretty sure thing as decent stays go and always overpriced. This one is fine for overnight but surprisingly, they have a butt load of sandspurs. Poor Katie could hardly take 4 steps without picking them up in her paws.  Merrily finally had to walk her on the other side of the highway. None over there. Who woulda thunk it?

Plans (right now) are to mosey on over to Hart Ranch Southeast of Custer for a couple of days before moving on to Big Pine Campground just west of Custer. A couple of days ago our next door neighbor, Phil, was really adamant about how nice Hart Ranch is. Since we are Coast to Coast members (have not made back our investment, yet) we could stay for $10/night w/FHU.

We had originally planned to stay there but it seemed to be farther from most of the venues than we wanted to be so we changed to the Big Pine Campground.

BTW, this is one of the drawbacks to Coast to Coast: You are limited to a reservations window of 3- 60 days before you want to stay. This plays hob with a spontaneous camping style ie. “Where shall we stay, tonight”. Most C2C parks won’t accept walk-ins by members.

There is a lot to see around the area besides the Mount Rushmore monument so we are planning to see the Crazy Horse Memorial (at least as much as has been finished), Custer State Park, maybe the Rushmore Caves, and  long time friends we have never met, Mike and Pat McFall who live in the area.

More as we progress.

Go to the Hub Site for all of RVBudds Blogs