Tuesday, I went to Hawley’s Camping in Garner, NC to see about a few things including scheduling the AC replacement.

When we were hit by the tornado on 4/16, it is likely that some electrical surge that was not completely handled by my surge equipment managed to get through to my AC, my UPS on the computer, my cordless phone and the thermostat on the AC.  Unfortunately, proving this was the cause is limited to the simultaneous timing of the failures of these separate items.

It took 3 days for us to get power back but a small generator kept our refrigerator cold.  The rest of the electrical stuff was off until full power returned. Even then, I only noticed the UPS was bad when the power dropped a day later for a few minutes.

The cordless phones, while powered on are only used when I have a good enough broadband connection to run my Magic Jack and the Wi-Fi service in the Smithfield KOA was just not solid enough to make that usable.  I did not try to use it until we were in the Zooland Family Campground in Asheboro, NC some weeks later.  It turns out that the base unit is now dead.

As for the thermostat and AC, those were not discovered until a few weeks later than the tornado and we needed the heat pump up in West Virginia and all it would do is hum for a couple of seconds and then shut off.  I figured that the compressor is frozen, maybe due to the hole in the condensing coils on the roof from some flying debris during the tornado.

So, I need a new AC, Thermostat, UPS and Cordless phone.  I have contacted Progressive Insurance and though it has already gotten complicated, I am still trying to arrange a meet with the appraiser and the Hawley’s service tech later this week (I hope).

I am certain that the AC is not repairable and in a leap of faith, I already ordered a replacement 15k heat pump ($1000 – prepay) so it will hopefully be here be installed before the weekend.  I hope the Progressive guy comes through so we can get back on the road next week.

Meanwhile, I need to focus on fixing the exhaust connection on the generator and cleaning and glossing the rear fiberglass end cap of DaKotR.

I have tweaked and twiddled with the prototype pages I previously showed and have found more things that I would like to be able to do with it.

Though something of a programmer in my previous life, I am no HTML whiz so I look for higher technologies than the original hammer and chisels to create web pages.  I still like Windows Live Writer and still want to use it to maintain most of this new format.  So far, I have been unable to find a way to use it on the Google Sites platform that the previous prototype is built on.

So, back to Blogger.com to see what I can weld together to get something close to what I am aiming for.  Some of the private comments I got about my original Hub page were about how uncomfortable it was to look over the main page and I agree.  Even after a lot of tweaking, it is still not as easy on the eyes as I would like so I have worked up another version of a hub page where all of my blogs are anchored.

What I have come up with is this: RVBudds.blogspot.com/ 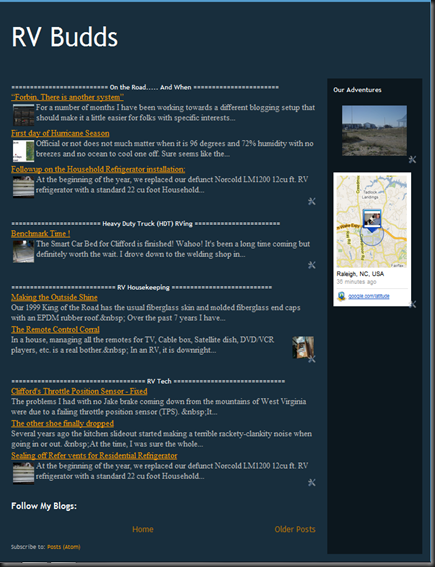 It is less complex to the eye and flows better. It lacks a lot of the borders, framing and fine tuning flexibility of the previous design, however, it does support commenting and I can use Live Writer to maintain it.  That will save me a whole lot of time.

It also allows me to continue to use this blog as my DAILY blog so I don’t lose the continuity and my archives of posts and comments will continue to be available and grow with the site.

As before, one can get to any of my other blog sites from this one page but each of the other blogs it references can be individually “followed” if desired.

I will be adding a few features, like a SEARCH box for all my blogs, An archive list, Followers and much more but I really don’t want this hub page to get out of control with bells and whistles.  I tend to over build when I get enthusiastic about a project and some of my wonderful wants turn into “why-in-the-worlds?” really quickly.

Please check it out and please leave comments (now that you can).

“Forbin, There is another system”

For a number of months I have been working towards a different blogging setup that should make it a little easier for folks with specific interests to just follow those parts that they like.

I know that not everyone is interested in everything I write. Heck, I am not always interested in all of it at one time, either.  Plus, I wanted the more technical material to be a little easier to find for reference purposes.  Right now, a post for a single day may have some stuff about travel, a little work I did on a PC, a new problem that has cropped up on the RV, etc.  This does give a sense of how my day went but it is almost useless for reference when I want to link back to a technical item that is buried in a journaling blog of the day.

I had the idea that on a main blog entry page, I could have the latest 1 or 2 posts from each of several other topically selected sub-blogs of mine.  Anyone could just view that page to see what has been updated and go directly to a specific topic or blog. This is a little like blog readers do across a set of blogs but I like the idea of having a focus point that provides a jumping off place to start. 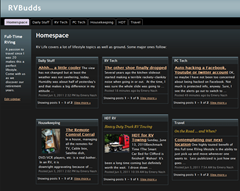 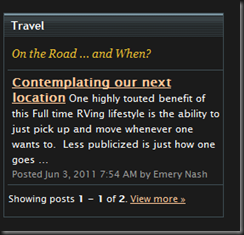 I know that some people are only interested in one topic, like what travel  related content I may post. This way, any given topical area can be separately subscribed to by anyone and they don’t even have to see the headings on any of my other blog areas if they don’t want to. 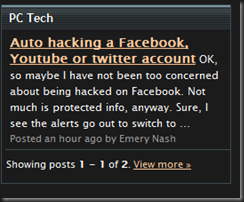 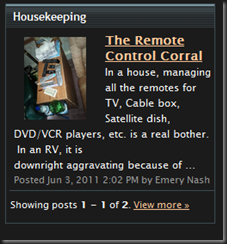 Or if RV Housekeeping and organization tips interests you I have a topical blog for you to enjoy (I hope).

Still, there is nothing earthshakingly different for daily readers but I am hoping that this new format will make the content more aligned with your interests.

I will maintain some blogging on this site, too, until I am sure the new format is going to work like I want. Please comment here or there and let me know what you think, how you like (or don’t like) the new site and make suggestions.  I really want to kick this up a notch and I don’t have Emeril in my back pocket to give a good BAM!