As we have traveled almost daily, I have been trying to keep our progress posted on Google+ in my RVBudds circle. It is just too hard to always setup the computer each night (no laptop ATM) and blogging from the tablet is too hard. I may see a laptop or ChromeBook in our future instead of a second tablet. 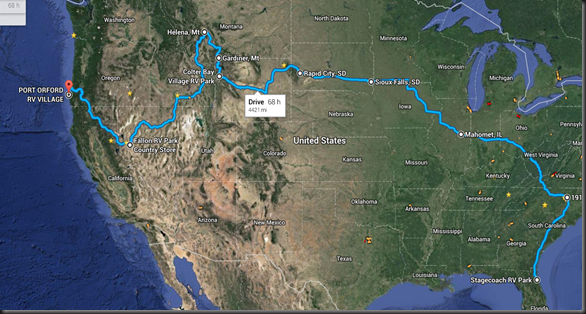 We have crossed from Sioux Falls, SD to Rapid City, SD, Custer, SD (Nice area), Dubois, WY, Grand Tetons National Park for a week, Yellowstone NP (Stayed in Gardiner, MT) then on to Helena, MT for a week.  Phew!  I have to ck my maps to keep it all straight.

While still in Gardiner at the north entrance to Yellowstone NP, Amazon put out another Workamper hiring notice and since we had been toying with the idea of working for one of their facilities.

Although our long term destination is still Southern Coastal Oregon for the winter, the recent costs of new trailer tires and the electrical problems on Clifford have left us feeling the need for some supplementary income. The Amazon facility in Fernley, NV is not too far off-track so Merrily took a shot at a job.

We really had no idea how long the process would take or if she would get the job so we decided to hang 7 in Helena. If a job came through we would head down to Fernley, NV. If not, we would head on over to the Oregon coast.  Either way, the weather (and government) has been getting too unpredictable to follow our original plans to trek up to Glacier National Park before heading to Oregon so a short holding pattern in Helena was a good chance to catch our breath, strategize our possibilities and see if Amazon was going to work out.

Our trip from Helena to Fallon, NV has been fairly direct. We swung through Dillon, MT, ARCO, ID and drove through the Craters of the Moon National Monument (closed, of course.. dumb government management style!) to Twin Falls, ID.

Yesterday, we left Twin Falls (would have liked to have stayed there a few days because there is lots to see and do in that area) and arrived in Elko, NV mid afternoon.  The Pacific TIme zone runs east/west across the northern Nevada state line so it was odd to be traveling south but setting clocks back another hour.

Here, at the Iron Horse RV Resort, the weather is very pleasant as it has been on our whole trip.  We skirted around behind one big storm as it swung around south of us headed to Denver so we have had no rain, no snow and nighttime temperatures have been above freezing for all but 2 nights.

Today, we move on the 288 miles to Fallon, NV to get setup for Merrily’s gig at Amazon in Fernley, Nevada. She still does not have a starting date but all the prelims are done but the drug test which will be on Monday.  (UPDATE:  She starts the 19th.) We got reservations in the Fallon RV park, about 22 miles from Amazon’s Center. It’s not as close as we would like but it is a lot closer than the 35+ miles to the RV parks in the Sparks and Reno areas.

Amazon just started placing workampers in this park so I think that we were fortunate to get in with no lead time. Amazon approves and pays the parks, directly, so we must stay where they will pay. We will see how it goes.  Amazon does allow folks to switch campgrounds so after we have time to spec out other choices we may have something open up, closer to work. If not, Fallon is not a deal breaker distance.  The good news is that there is a WalMart in Fallon so we are gold.