West Virginia has some very upscale state parks that they call Resort Parks.  Pipestem State Resort Park is about 15 miles east of Beckley and can be reached via state road 20.

The highways, other than Interstate, are the usual narrow, tight turns up/down/all-around roads one finds in the eastern mountains of NC, GA, VA, WV, TN, etc… you get the picture.  WV roads at this time, might be in worse shape, maintenance wise, than some of these other states. 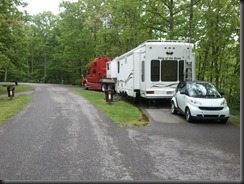 The RV sites in this campground are pretty nice with paved streets and drives but gravel patios. They are also small. Site 24 is the only one that we could get into, comfortably. There were a few others that we could have gotten into with a struggle and then park the truck elsewhere but most of them, including 24, were not very level. 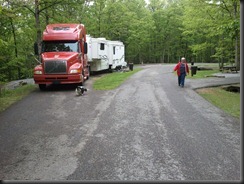 I think the same crew did these sites that do the WV roads and don’t believe in level as being important. High water pressure >100 psi, makes a pressure regulator advisable and they have a sign in the office to that effect.

WE came here in heavy to light rains all day and that was day before yesterday. It is still “misting” with an occasional downpour.

A real disadvantage to traveling up these small WV state roads in this kind of weather is the ongoing problem of falling rocks. Yesterday, we drove into Hinton in the Smart which is only about 10 miles east but there were plenty of places that rocks of various sizes were on or on the edge of the road and plenty of rock pieces still scattered on the roadway.

Of all of the advantages of the Smart Car that we tout, ground clearance is not one of them. With a full tank and 2 people, 3” of clearance in the middle is only a dream so always go around stuff on the road, never just span it and expect it to not hit because it probably will hit something underneath.

Luckily, no damage but could have been bad.

We are planning to stay here until next Monday before heading back towards Raleigh for some appointments. WV parks have a NO REFUND policy so be sure you are going to stay for what you pay cause you won’t get any of it back no matter what.

Of the several WV State Resort parks, Pipestem was the only one that even had much RV camping available. These parks tend to cater to semi-camping in lodges or tenting up to pop-ups but I figure that the roads will probably deter most folks with anything bigger, from coming here.  Guess that says too much about me.

For all the hype about the wonderful views in WV, that is old print. Everywhere we have been, the views from the roads are obscured by trees. Maybe in the dead of winter one can see fairly well but then, what would there be to see.  So far, not that impressed with WV.

On, BTW, the toll road (I-77) charged us $9.50 per toll station going North to Charleston. That was $28.50 total. Coming back down it, we found at the last toll booth that Recreational vehicles are charged a flat $3.50.  Of course, there were no signs posted anywhere other than for the $2 per car rate. The rest was assumed to be per axle and I have 6 by their count.  Another WV “gotcha”. Not a happy camper in WV.